why is maggie with glenn in walking dead?

no racist but don't you think that's taking things a bit too far? 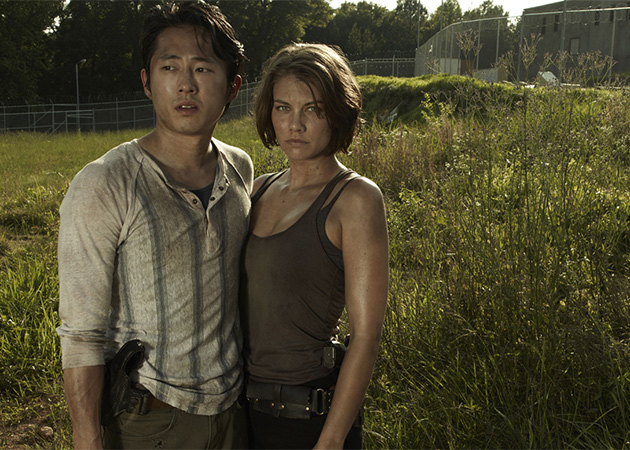 It's just a show but IRL she would of sucked Shane's dick first night. 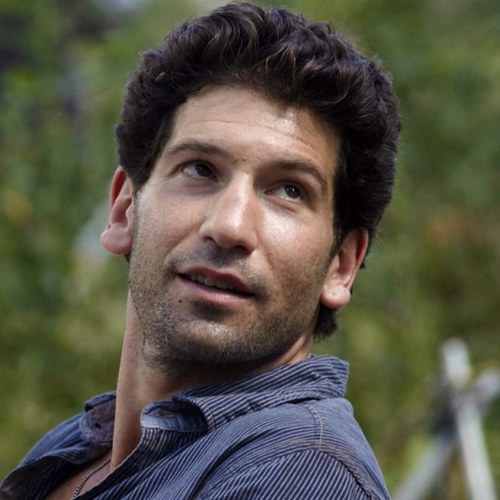 3/4 of the world's Chads, Tyrones and Romeos have been devoured by zombies. Not to mention in her own group she doesn't have much options between a redneck, an oldcel, an underaged child and mostly women. Besides Glenn probably has the biggest d in the crew between the redneck (they're always small) and the oldcel.

LMAO Asian men are FORBIDDEN from getting laid in the white man's world.

He fWHRmogs everyone else on the show except maybe Rick.

This is legit.
V

time2pretend said:
it's based on real life. have you seen the thread of currycel trying to cuck the Asian guy with the 8/10 girlfriend?
Click to expand...

who cares? Its not real life and you guys act like its never happened that a hot white girl has fucked an asian? Besides the fact its a fucking apocalypse.
V

G to. allindaeyes said:
who cares? Its not real life and you guys act like its never happened that a hot white girl has fucked an asian? Besides the fact its a fucking apocalypse.
Click to expand...

furio said:
It's just a show but IRL she would of sucked Shane's dick first night.

Shane was so aesthetic before he buzzed his hair. that thickness/density
N

virginbychoice said:
no racist but don't you think that's taking things a bit too far?

arent you a racist??

Jon Bernthal/Shane in Daredevil is great

Glenn is one of the most groundbreaking characters in the last 100 years.

Regardless of what happens to Glenn in the season finale and beyond, his character will ultimately be a major part of The Walking Dead and AMC's lasting legacy.

I believe that in years to come, post secondary students will occasionally reference Glenn in term papers for media studies.

In 10, 20, 25, 50 year retrospectives, film / television historians and academics will look back on Glenn as being one of the most groundbreaking characters in Western film and television history for the following reasons:

1) He is Full Asian (no Whitewashing)

AMC did not cop out with the casting in the adaptation. Credit also goes to Kirkman's courageous writing choices in the comics.

They could have easily "gone in another direction" and erased his race jumping from the graphic novels, but his storyline would have essentially stayed the same. This is a true litmus test - just like how the protagonist was changed from a male to female in the script "Flightplan" for Jodie Foster and the movie's action sequences and storyline remained essentially the same.

But then again, maybe daring decisions were made, and certain higher ups pushed for this casting choice - in the early days when a lot of people thought a "stupid zombie show" would never work and become a massive ratings juggernaut.

I doubt this decision was made because they "needed" an Asian to hit a target demo; there are no major Asian characters in "Game of Thrones" and "Star Wars The Force Awakens," but I'll bet plenty of Asians have watched those properties in droves.

If this were a teen show, a network like CW may have tried to pass off a mixed race or half-Asian to make things more palatable to the audience. The CW is notorious for taking exotic looking female beauties and passing them off as "diverse", or "urban black" - see Kristin Kreuk, the 90210 reboot, The Vampire Diaries, and many more.

Many times, Asian characters and stories are completely whitewashed; see the real life story behind the casino movie, "21," and Emma Stone laughably cast as part-Asian in "Aloha."

There are few male Asian actors in Western film and television period. It is remarkable that the character of Glenn appears in one of the highest rated TV shows (since "Lost" and the first season of "Heroes.")

2) He isn't relied on for being good at math nor a kung fu / karate master.

Considering that he is Korean, he isn't expected to know Hapkido and Taekwondo.

He speaks perfect English - he was not required to adopt a fake accent to make him seem "foreign" and less American.

He tackles the Walkers like a "normal" person, not a martial arts superstar.

The obviously "Eastern" weapons that look like a katana sword and bo staff are never handled by Glenn as a viewer might expect - and are instead given to Michonne and Morgan - a clever touch, turning a common archetype on its side with a sly smile and a wink.

In fact, pre ZA, he is given one of the most American adolescent occupations of all - a pizza delivery boy.

He doesn't really fit the "support" or "sidekick" stereotype. See John Cho's "Sulu" in the the Star Trek (2009) reboot, or Jay Chou's "Kato" in The Green Hornet (2011) or the gay assistant in Entourage.

He plays a vital asset to the core group - his strengths are in strategy and safely making food and supply runs. He seems mostly self-sufficient and is very effective at these runs on his own.

True, he has had close brushes with death more than a cat has lives. But some of those occasions were beyond his control, or arose because he came to the aid of someone else. Most of the times when he has messed up, it was more in part due to the incompetence or weakness of someone else that has tagged along.

He is a directly responsible force on the main protagonist's journey. If not for Glenn, there is a strong chance that the inexperienced Rick would have ended up as a rotting corpse inside the tank, or as Walker food outside of it.

If not for Glenn - and serendipitous coincidence - Rick may have never reunited with Carl (and by extension, Judith.)

There are lots of romantic pairings in the comics, some including Rick, but in the TV show, it can be argued that the Glenn - Maggie pairing is one of the most enduring.

Figuratively, because it seems to be a fan favorite, and literally, because things started on the farm and they are both still alive and together.

It is very unusual for the romantic focus to fall on an Asian male.

Normally, Asian males in Western productions fall into a familiar yet strange paradox: they are made to look like domineering men while simultaneously being asexual. It is an emasculating neutering of sorts. Glenn, though, is given a full range of human emotions and sexual drive.

5) He is paired with a Caucasian female partner

Up until this point, this type of pairing has been uncommon in the history of Western film (outside of the Silent Film era) and television and definitely subverts expectations.

Given the ZA context, everyone seems to approve of the relationship, and Glenn is even given the blessing of Maggie's father, Hershel.

6) He is fully sexualized

I can't stress this one enough.

This is extremely uncommon and rare.

Even in movies like "Romeo Must Die," (2000) in which Jet Li carries a mainstream studio film, he does not "get the girl" - even if the girl in that case was another ethnic minority - Aaliyah.

If I recall correctly, the two do not even share an on-screen kiss at the end, to fall in line with the $tatu$ quo of the existing upper echelon Hollywood power structure, and in fear of alienating the audience.

On the other hand, in S03E13, Glenn has an intense, full on, graphic sex scene with Maggie. It is not suggested nor implied offscreen - it happens before our eyes.

Can anyone count on the fingers of one hand how many other times this has occured in Western film and television?

Furthermore, there are tangible consequences to this fully realized sexualization; Maggie becomes pregnant.

Anyways, kudos to Robert Kirkman, Frank Darabont, the showrunners, and the AMC producers for having the balls to take bold chances.

Glenn is definitely one of the most unusual television characters of all time.

lono said:
He fWHRmogs everyone else on the show except maybe Rick.

From what video is your sig?
B

its bcuz he has a big skull

Because its the fucking zombie apocalypse lol~
S

Redneck and rural white girls don't typically dislike Asians at all. The white girls that hate Asians are suburban sluts from wealthier families who consume Hollywood and media related material all day long. 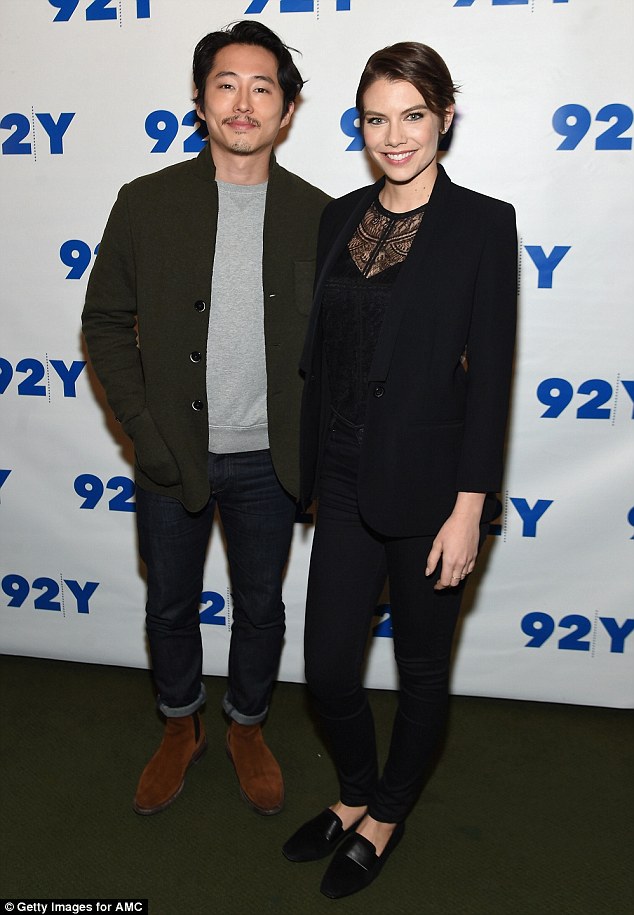 i'm gonna stop watching if he dies on sunday

He is good looking. Not at her level of looks but irl you don't need to be better looking than the woman to have a relationship with her. All you need irl is to be a lookism 6 to enjoy a good life. At that level most girls will consider you except for the exceptionally attractive ones i.e. 8s and 9s
You must log in or register to reply here.
Share:
WhatsApp Share Link
Top