When does "youth" end?

Depends on the person

I never had youth My sub humanity robbed me of my youth.
P

Youth ends after 25 for men. That is the age our bodies are 100% done developing and after that we just decline and slowly lose virility. A little bit earlier for women but not by much (the following numbers apply to men)

The male human body seems to be at its most virile at about age 22-25. Keep in mind that the reason other athletes like football and basketball players peak in their late 20s is because those sports rely a lot on skill and knowledge of the game, and not only raw athleticism. Also if you just go around researching what age most women find physically attractive in men, most will give either 25-30 or 20-25 as the prime ages.

Your body is downhill after 25. It's true that you can build muscle and endurance into your 30s and 40s but you have the most potential for gains in your early 20s.

I'll leave this graph here, too. It demonstrates how mortality rate changes with age, which is a good way of measuring youth and aging. I speculate that the sharp increase in mortality in the teens is due to typical risky teenage behavior. It levels out in the early 20s and only slightly increases in the late 20s for women. After 30 aging is full force. 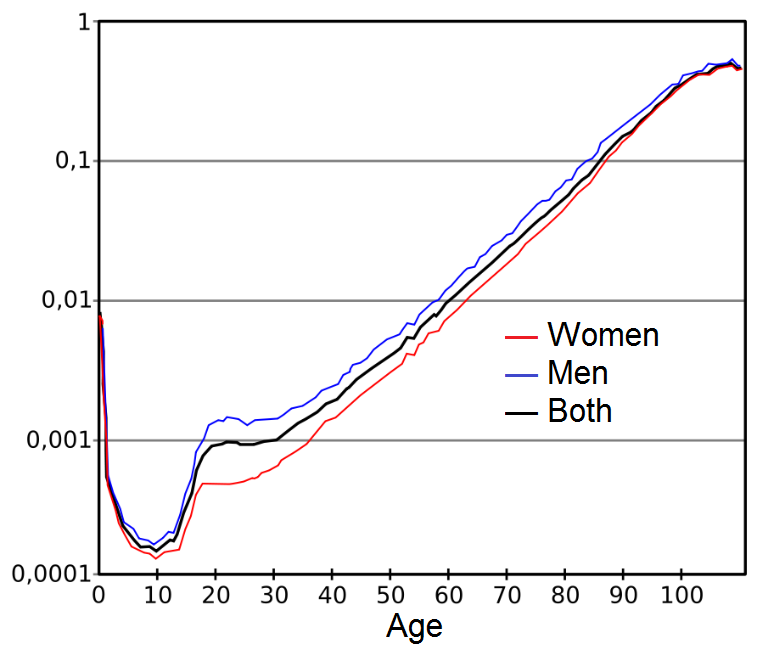 When your hairline is gone

I wasted my youth

technically I'd say 25 since that's when your brain stops developing

but then again, there are celebrities that have been living a god tier life all the way from their teens and still going strong, partying, fucking, getting drunk and whatnot into their 40's when you stop being gl

The moment in which my adulthood began, with no going back, happened when I was 22. But I stopped feeling young this year (25).
My skin and hair are fine. But the agepill has taken so much from me mentally.

AsymmetryIsDeath said:
when you stop being gl
Click to expand...