The Rock with 5'8 Jason Statham


Schwarzenegger's official height of 6 ft 2 in (1.88 m) has been brought into question by several articles. In his bodybuilding days in the late 1960s, he was measured to be 6 ft 1.5 in (1.867 m), a height confirmed by his fellow bodybuilders.[citation needed] However, in 1988, both the Daily Mail and Time Out magazine mentioned that Schwarzenegger appeared noticeably shorter.[199] Prior to running for governor, Schwarzenegger's height was once again questioned in an article by the Chicago Reader.[200] As governor, Schwarzenegger engaged in a light-hearted exchange with Assemblyman Herb Wesson over their heights. At one point, Wesson made an unsuccessful attempt to, in his own words, "settle this once and for all and find out how tall he is" by using a tailor's tape measure on the Governor.[201] Schwarzenegger retaliated by placing a pillow stitched with the words "Need a lift?" on the five-foot-five-inch (1.65 m) Wesson's chair before a negotiating session in his office.[202] Bob Mulholland also claimed Schwarzenegger was 5 ft 10 in (1.78 m) and that he wore risers in his boots.[203] In 1999, Men's Health magazine stated his height was 5 ft 10 in (1.78 m).[204]

So i heightmog the Rock! This is a revelation.

Dude's probably 6'2" maybe 6' with spare change now that he's older. Doesn't have the frame of a guy under six foot tbh. Look at his teen photo. 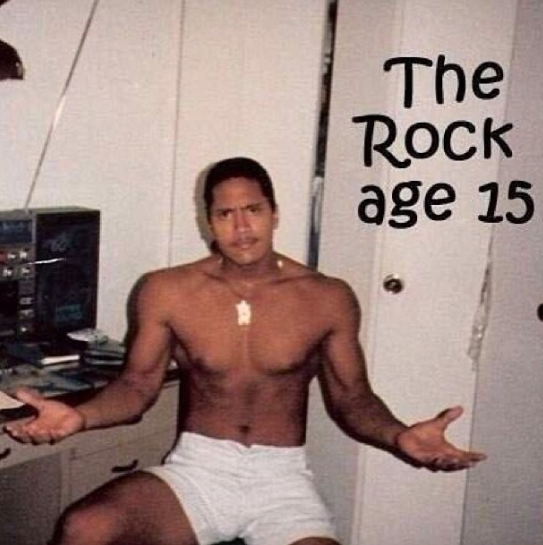 He was probably 6 foot maybe a little taller when this picture was taken. You can just tell by his limb length.
B

fucking hell that girly eyed faggot is 5'8? talk about bitch made.. how you have such an insufferable feminine pheno AND be short. holy fuck can someone take this guy out. his face alone pisses me off

Rock is 6"2 max
You must log in or register to reply here.
Top