ilikedicks said:
Pasqualino was sadly the only good looking guy on Skins, and they killed him. The ethnics were ugly, the ethnic British dudes ugly and Hoult looked like a fuckin' faggy twink nerd. I like Pasqualino better with long hair on Musketeers. The typical British mop top cut is beta as hell. I dont really watch the show, but I was just looking at his character and it was apparently ' freddie mcclair'. So he was shown as what race in the show? Just wondering because he is more ethnic looking than even 90% sicilians. 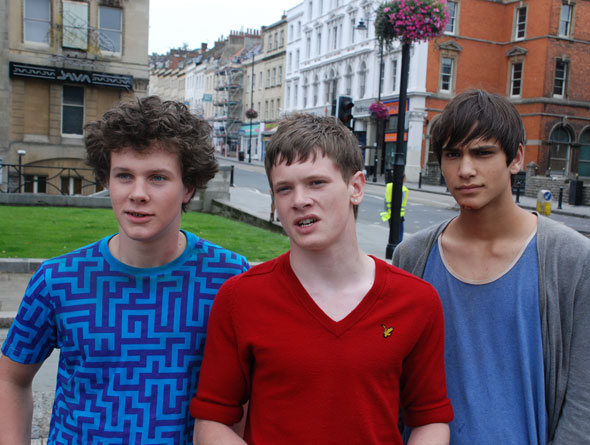 its like the victorious show making the half indian guy a full white guy lmfao
Click to expand...

I don't ever remember anyone referring to anyone by race in that show. It was never brought up as far as I remember. I think he might be part Indian irl even if he doesn't claim it and you're right he doesn't look like most Sicilians. If not Indian he could just be extremely atypical an exotic type in his ethnicity kinda like how Mr. Bean is atypical for a British person.
Click to expand...

He is probably not indian, I am pretty sure someone in his family probably cheated with a berber or something. He looks like he could be paki or north indian though. ( light skin ) But its just unlikely

nothing wrong with his nose..guy just looks like a twink (tiny skull)

9/10 British standards, 4/10 American standards, would be stuffed into toilet seats in American high school unless he was a theater fag and leveraged that to the administration to get protection from jocks.

Overrated tbh, as is Emma Stone.

he is cute AF and has a good soul with JB appeal. One of the few white guys who will be appreciated @"johnny the NT male model"

5/10, saved immensely by his coloring + phenotype, would be ogre if he wasn't so atlanto-nordid

Scar Tissue said:
I think this dude is ugly as fuck.
Click to expand...

This is all you need to know.
B

Scar Tissue said:
I think this dude is ugly as fuck.
Click to expand...

This is all you need to know.
Click to expand...

does he mog your face?

This is all you need to know.
Click to expand...

No way he mogs me.
B

buckweed said:
does he mog your face?
Click to expand...

even if he did wore glasses?

He has a literal peanut skull

[img=160x160]
This actress is considered the most beautiful woman in the world by People Magazine. What do you think?

yadayee said:
[img=160x160]
This actress is considered the most beautiful woman in the world by People Magazine. What do you think?
Click to expand...

I think you should stop asking silly nonsense questions goyim. Jones said:
They aren't white-passing, but they look more white than average for their race.
Click to expand...

ive been told i look like this mans
You must log in or register to reply here.
Top