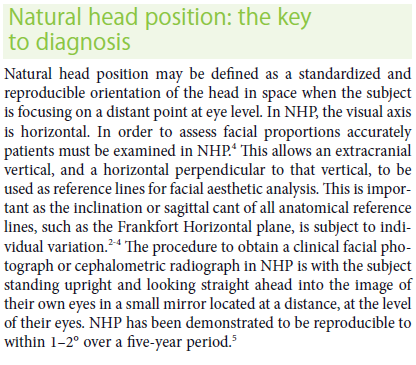 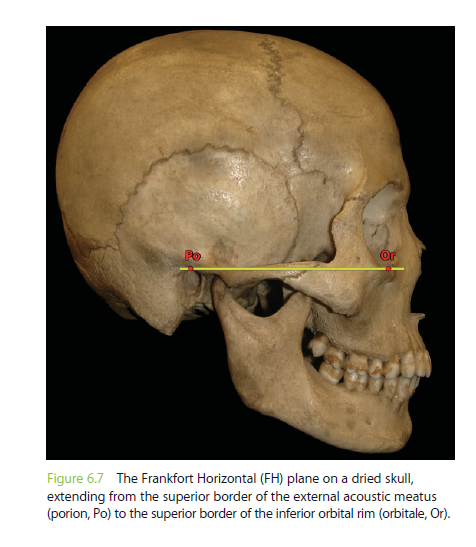 However this isnt a acurate in many cases due to individual variability. 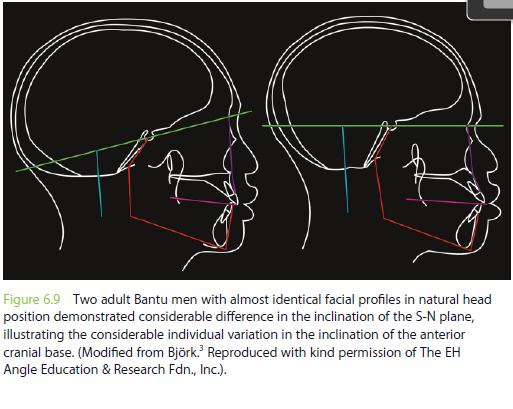 Therefore It is therefore necessary to reduce the limitations of using the Frankfurt plane while maintaining the advantages of the overall concept. This may be achieved by evaluating the patient in natural head position and constructing a true horizontal plane (THP)

Natural head position (NHP) was introduced into orthodontics in the late 1950s (Downs, 1956; Bjern, 1957; Moorrees and Kean, 1958). Broca (1862) defined this head position as ‘when man is standing and his visual axis is horizontal, he is in the natural position’ (cited by Moorees and Kean, 1958). A typical method of registering NHP is based on the work of Solow and Tallgren (1971), who cited Mølhave (1958) in which subjects are asked to stand in an ‘orthoposition’ and look into their own eyes in a mirror after a series of neck flexion exercises. Other methods of NHP registration include instructing subjects to look at a small light (Cleall, 1965), the use of a fluid level device (Showfety et al., 1983), an operator-estimated ‘natural head orientation’ (Lundström et al., 1995), and the use of an inclinometer (Preston et al., 1997). NHP can be recorded radiographically (Bjern, 1957; Moorrees and Kean, 1958) or photographically, which is preferred to allow the most freedom in producing a natural position (Lundström and Lundström, 1989).
Click to expand... 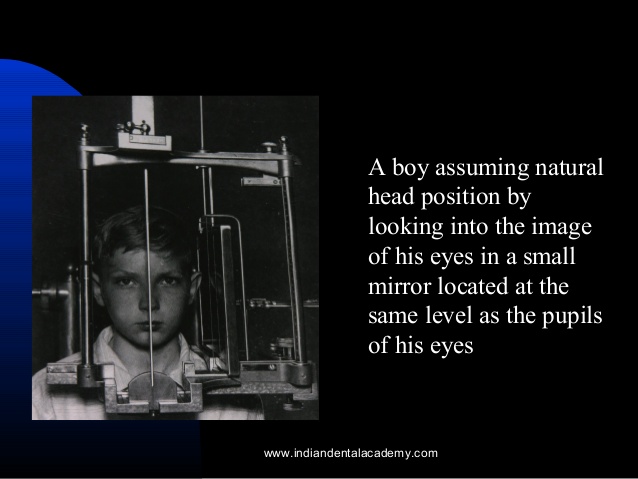 Now with the natural head position we are able to determine the true horizontal plane:


A plumb line was used to define the vertical plane (VER) on the photographs, and a line connecting soft tissue glabela and pogonion were transfered from the photograph to the lateral teleradiograph. A true horizontal line (HOR) at a right angle to the vertical plane with the intracranial reference Frankfurt horizontal plane (HF) was used to assess the variability in relation between HF and NHP.
Click to expand...

2.3.1 Lateral view
The patient should be seated comfortably with their back in an upright position and asked to adopt their natural head posture (NHP), in which they are generally viewed in everyday life. This can be made easier by asking them to look in a mirror mounted straight ahead of them. The alternative method of positioning the Frankfort Plane (FP) parallel to the floor may place them in an artificial position, since this not a reliable horizontal reference plane in patients with significant facial skeletal discrepancies. It has been shown that NHP is more reliable than FP for orientation of the head. Inappropriate head positioning can result in a false perception of the antero-posterior jaw relationship (Figure 2.1).
Figure 2.1 The patient’s head posture can affect the clinical impression of their antero-posterior jaw relationship. Habitual tilting of the head to the left or right side should be avoided. However, for patients that have a condition that produces involuntary tilting, such as tortocollis (due to shortening of one of the sterno-mastoid muscles), this should be accepted as their normal posture, as it is unlikely to improve as a result of surgery.
It is important for the peri-oral soft tissues to be relaxed, particularly in patients with increased vertical proportions, who may have incompetent lips and will tend to habitually posture them together through mentalis muscle hyper-activity.
Viewing the face from the lateral aspect allows the assessment of:
http://pocketdentistry.com/2-dentofacial-assessment/
M

i noticed that once i sit and try to make a picture my maxilla and jaw seemed to be more forward. it was an illusion. once you sit down your head moves more forward and you are not in the natural head postion anymore

shouldn't the blue line be placed slightly higher than it is here?

or rather, the image rotated a bit

It's not possible to determine natural head tilt in a head that has not developed properly, since in such heads all individual features will be out of alignment. In a correctly developed face the ears, forehead, nose, mouth and eyes will point to the same direction. In an maldeveloped faces the features will point all over the place and vary a lot from person to person.

What correlation is there between ears, cartilage, and the rest of your bones?

How do you posture max? knowing this? Is there way to make this the natural point?