Native americans are the direct descendants of australoids that went to siberia and became cold adapted,these humans later went into the middle east and became a hybrid race by mixing with khoisanid like humans becoming  brown cockasoids.


basically all of you guys are freaks and mutants of the original race,black and then native american.

might also add  that with each mutation the races become uglier or weaker and less dimorphic,whereas with the evolution of australoid to protomongoloid we actually looked human and aesthetic.so protomongoloids are in fact the only humans in its truest sence

You're going to win awards and become famous for this discovery. Have you contacted any anthropology journals?
S

its pretty well known among Geneticists.

even negroids are a modern race  .

allindaeyes,you fool I look 100% native american lmao besides natives can look like anything as all races evolved from them except australoid and negroid.

OP's mother is light black and his father is Germanic.

He copes with neither looking black nor white by obsessing about Native Americans, whom he has taken to thinking he resembles.

This would not be happening if he had been born black or white. 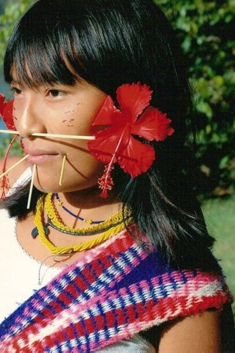 type in beautiful yanomami   youll find alot more than this one

unixed natives dont exist outside the amazon,but if you mean like 90%+ natives then yes there are plenty ....just type in Belleza oaxaca.Í  had a few naive beauties from mexico saved on my usb but wont go thu it today,as it has 1000s of pics to sort out if I wanna find it.

Boss said:
Natives can be good looking but nowadays their all mixed/mestizos except some of the south american ones from the less aesthetic tribes
Click to expand...

30% of latin americans are 90%+native still and speak native american languages.try again.the other 5% is like black and the rest spanish but its too miniscule to effect phenotype,especially considerinh native and asian genes are uber dominant(even 1/4 natives look noticebely native).  native american genes even override nigger genes  ,look at the miskito of nicaragua  or the zambos of colombia  .all my zambo aunts look completely native ,hair,color everything  .

I just said look up belleza oaxaqa  ..do you read?aint gonna search thru thousands  of photos .
B

I was talking about ones from america being mostly mixed

although I think mestizos/castizos look better than full natives anyways

mestizos look fully native so the point is mute.euro genes are obliterated in the face of the strongest genes on earth.show me a 50/50 mestizo that looks even an iota european.......its the native genes that improve the subhuman cockasoid med faces of retrusion and bug eyes,hook noses,thin lips etc she craps on all white models posted on this site.pure native.

as for the question  :nikan tlaca are the direct desendants of australoid aboriginal type people that became cold adapted in the arctic...from them spawn both neomongoloid subhuman asians and brown cockasoid subhumans who late became the arabs that populated europe and went different mutations(adolfhitler had a thread)this protomongoloid population mixed with khoisanids to become aethiopian like people wich became brown caucasoids then white caucaosids etc


basically natives are the first phenotypically human people and most races descend from them.niggers came later .niggers are a relatively 'new''race.they are also mixed and went adaptations.the first humans were australoid.
B

never seen a white with my asian eyes ,high cheekbones,light brown skin,curly hair or button nose.not white features.only my lips are white because they arent super super full(but not thin either)  .

my unexposed skin is white as snow in normal lighting but under fluorescent lghting you see its golden tone.  lots of mongoloids have white skin,look at the Japanese  .

You don't have high cheekbones, Asian eyes or a button nose. You look like a mulatto/quadroon type. You remind me of a friend from childhood who was a mulatto.

Get it out of your mind please that you have pseudo Native American features because you don't.
T

johan, you look like a nigger with light skin. accept it finally

without any eye swelling I look exactely like this  http://lookism.net/showthread.php?tid=5063


and he looks polynesian there...soooooo

I may only look psuedo mongoloid when my eyes are extremely swollen like the recent pics,but I DEF do not look med or middleeastern or white.never.  I am just not a cockasoid...sorry   .
T

Gandharva said:
without any eye swelling I look exactely like this  http://lookism.net/showthread.php?tid=5063

no you dont. you're an ugly version of him and he looks already ugly.
You must log in or register to reply here.
Share:
WhatsApp Share Link
Top