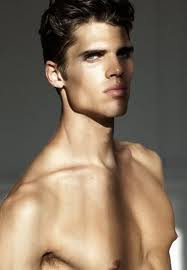 "Everything about Logan screamed bad boy, from his thick, silky, ink-black hair to his intense ice blue eyes to the black leather jacket that highlighted his broad shoulders. Oh yeah, he was sexy, in a rough, rumpled,I-just-climbed-out-of-some-girl's-bed kind of way. Apparently, Logan lived up to the hype and was well on his way to sleeping with most, if not all, of the hottest girls at Mythos. Supposedly, he signed the mattresses of the girls that he scored with just to keep track of all of them." 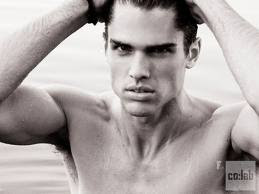 "Logan smiled and stepped back casually, elegantly twirling the staff in his hand like it was a cheerleader's baton instead of a deadly weapon. Of course, he would love gym class. Beating up people was something he seemed to excel at. Especially if you believed all the crazy rumors about Logan and how wild, violent, and crazy he and the rest of his Spartan friends were.

And he looked good doing it, Logan wore a T-shirt with the sleeves cut off, exposing the muscles in his arms. The deep blue colour of the shirt also brightened his icy eyes, amking them seem they were almost glowing in his face, even all the way over here on the opposite side of the gym. Logan raised up the end of his T-shirt to wipe the sweat off his face, exposing his flat, muscled stomach.


For a moment I stopped, completely mesmerized. Just ... wow. All that and washboard abs, too. Ones that put Samson Sorensen's to shame. I wondered if all the other Spartans at Mythos were as dangerous and sexy as Logan was of if he'd just been blessed with all the bad boy charm-" 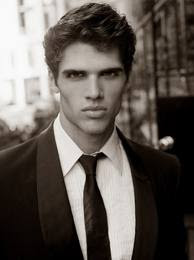 "Logan looked absolutely gorgeous in his black tuxedo, although he'd already undone his tie, as if it was chocking him. The jacket stretched over his shoulders, highlighting just how totally muscled they were. His black hair glistened underneath the silver and golden glows from the twinkling lights, and his eyes glittered like ice in his face. I stood there breathless.


Logan glared at me for another second before doing a visible double take. His eyes slid down the front of my dress, lingering on the punch stains that dotted the long skirt. My cheeks started to burn." 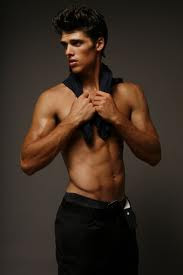 I don't know how long we danced before he cleared his throat.

"You look beautiful tonight, Gwen," Logan said.
He wasn't flirting with me or talking about sex like he usually did, but, for once, I almost believed him. It was like... I could almost feel him telling the truth, even though I wasn't touching his bare skin. Or maybe that was just because I was lying to myself, trying to convince myself that this dance, this moment, meant as much to him as it did to me.