Go to SE Asia and bang hooker pussy with no condom and no pull out. Don't yield to fag propaganda.

its not just hiv you can get from hookers you know...

My cousin recently got HIV too, made me smile.

Gays and women will get what they deserve eventually.
N

heilsa said:
its not just hiv you can get from hookers you know...

Of course, but HIV is the leader of the scare bandwagon propaganda.

heilsa said:
its not just hiv you can get from hookers you know...

Of course, but HIV is the leader of the scare bandwagon propaganda.
Click to expand...

HIV is hyped by gay people

HIV is a fucking first world problem, at least these people can get pussy.

how the fuck did some african countries manage to get a infection rate beyond 30 % ? 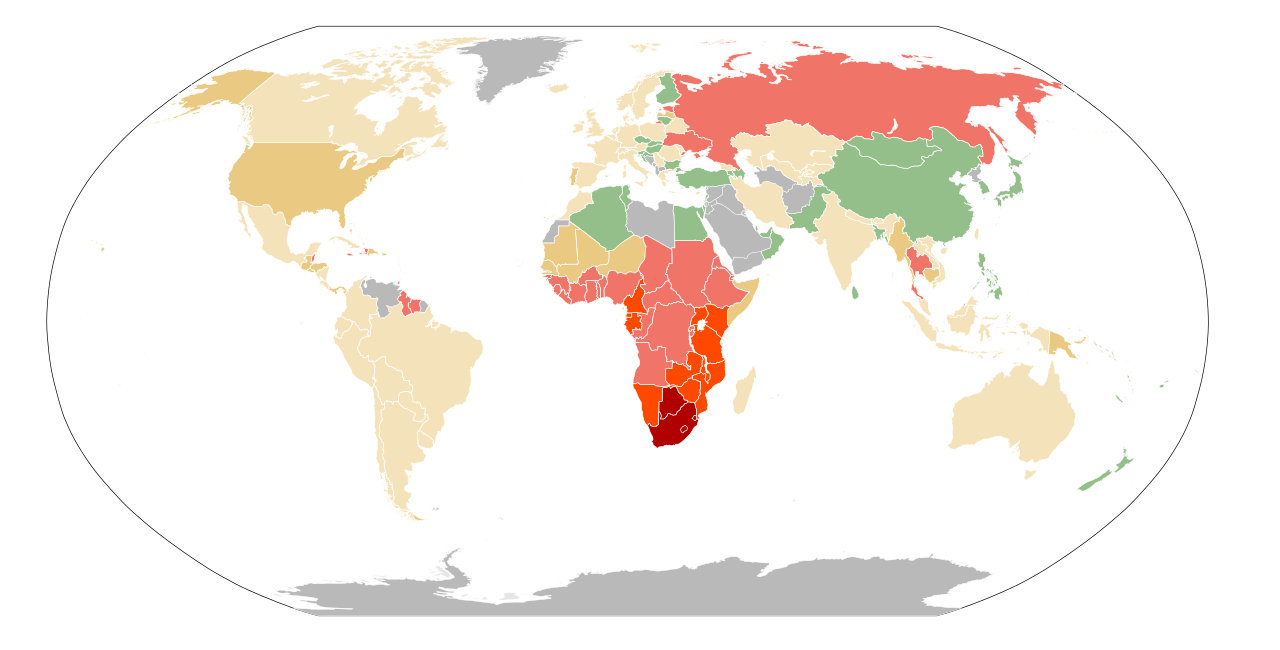 ^^^ loling hard at the map, romania is safer than the us and the us is like some of the african states

Nambog2 Revengeance said:
My cousin recently got HIV too, made me smile.

Gays and women will get what they deserve eventually.
Click to expand...

there's false positive too, like 5% of tests are so and you have to do 3 cheap tests if this happens, and preferably at 3 different labs

Some people dont have receptors for the HIV virus to attach into the cell.

Something like 25% of Northern Europeans are immune from getting HIV. Nordics win again.

Jawanomics said:
Something like 25% of Northern Europeans are immune from getting HIV. Nordics win again.
Click to expand...

HLA-B27 is known for its strong association with inflammatory spondyloarthropathies (SpA), a group of rheumatic diseases. Apart from playing its role in the onset of these inflammatory diseases, HLA-827 is so ubiquitous in the world that the carrying of this gene must have also have an advantage. There are some indications that a beneficial effect can be found as a less severe course of viral infections among B27-carriers. The literature on this subject was reviewed and revealed a favorable course of infection with influenza virus, herpes simplex type 2 virus, Epstein-Barr virus and, even more interesting, a protective effect of HLA-B27 in the progression of HIV infections. The course of HIV infection differs among individuals and is thought to be partly related to host-factor variability, reflecting broad genetic heterogeneity. The polymorphic human leukocyte antigens (HLA) are herein analyzed intensively with respect to this relationship. Cytotoxic T lymphocyte (CTL) responses, activated by HLA antigen presentation, are implicated in the control of HIV replication. An immunological explanation for the protective role for HLA B27 in HIV disease is that B27+ patients have a specific and strong CTL response against the p24 epitope, a conservative HIV protein that does not easily mutate. Some HLA genes seen in long-term non-progressors (LTNP) (>10 years disease free) are associated with a favorable prognosis. One of the alleles found predominantly in LTNPs is HLA-B27. More genetic factors seem to influence disease progression in HIV infections. Therefore, it would be interesting to further explore the influence of the genetic make up of these HIV-infected individuals. Knowledge of the immunogenetic profile might give clues for the individual course of the HIV infection, may influence the development of drug-resistant viruses and will possibly lead to a tailored therapeutic strategy in HIV-infected persons.
Click to expand...

Twenty-five years ago, HLA-B27 was recognized as a new HLA specificity. It is present throughout Eurasia but is virtually absent among the genetically unmixed native populations of South America, the Bantus and Sans (Bushmen) of equatorial and southern Africa, and the aborigines of Australia. B27 is a serologically determined specificity that encompasses nine different allotypes (subtypes), B*2701 to B*2709. Ankylosing spondylitis or related spondyloarthropathies thus far have been documented in individuals with any of the following five subtypes: B*2701, B*2702, B*2704, B*2705, or B*2707.
Click to expand...